The medical term for a drooping upper eyelid is called ptosis (TOE-sis) or blepharoptosis. In this condition, the border of the upper eyelid falls to a lower position than normal. In severe cases, the drooping eyelid can cover all or part of the pupil and interfere with vision. In such cases, the correction of the ptosis may be partly or fully coved by medical insurance.

Ptosis can affect one or both eyes. It may be present at birth (congenital ptosis), or it may develop gradually over decades. Sometimes ptosis is an isolated problem that changes a person’s appearance without affecting vision or health.

Not infrequently, people develop drooping of their upper eyelids with age or after eye surgery, including Lasik. Very often the drooping of the upper eyelid occurs so gradually over the years, that patients are truly not aware of how much of their vision is being affected by their droopy upper eyelids. Only a trained oculofacial specialist can perform special tests of your peripheral vision to determine if this is the problem, and can demonstrate how much improvement in your vision could be achieved with a minor procedure to correct the ptosis.

Some of the causes of ptosis include:

See Clinical Descriptions of Selected Patients in Photo Galleries: Ptosis Before and After Photos

Congenital ptosis — In this condition, an infant is born with ptosis because of a developmental problem involving the muscle that raises the upper eyelid (levator muscle). In approximately 70% of cases, the condition affects only one eye. If the drooping eyelid obscures part of the baby’s visual fields, surgery must be done to correct the problem early in life to prevent permanent loss of vision.

Aponeurotic ptosis (senile or age-related ptosis) — Aging is the most common cause of ptosis that is not present at birth. In senile ptosis, the long-term effects of gravity and aging cause stretching of a wide, tendon-like tissue that helps the levator muscle lift the eyelid. Although both eyes usually are affected, drooping may be worse in one eye.

Myasthenia gravis — Ptosis can be one of the first symptoms of myasthenia gravis, a rare disorder that affects the ways muscles respond to nerves. Myasthenia gravis can cause progressive muscle weakness, not only in the eyelids but also in the facial muscles, arms, legs and other parts of the body. 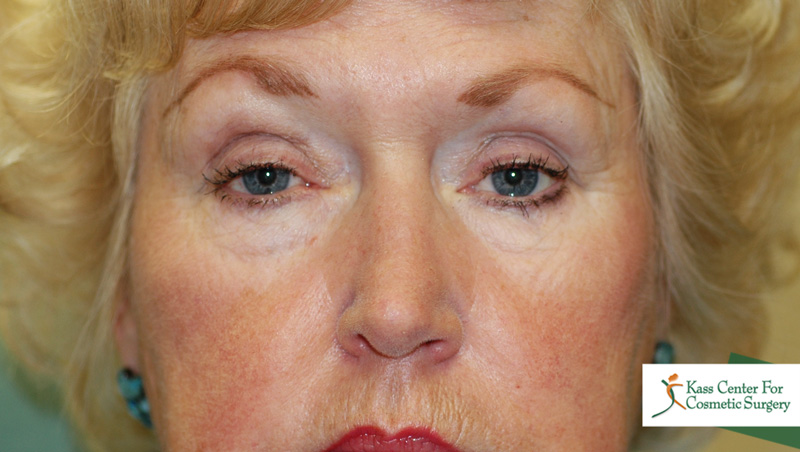 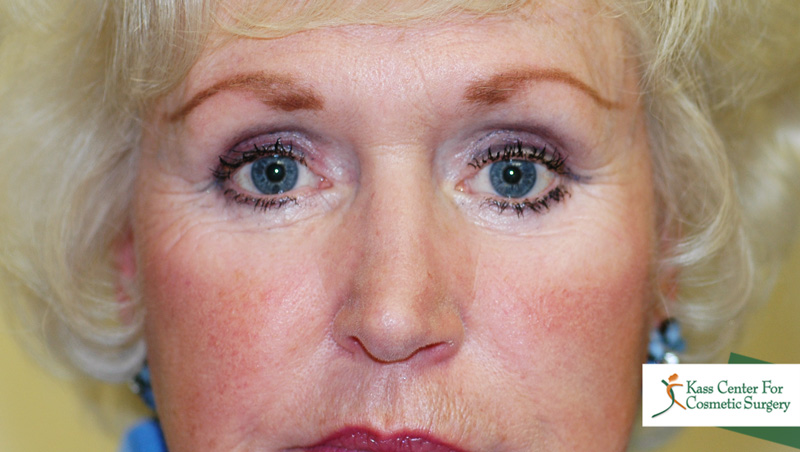 Muscle diseases — Ptosis can be a symptom of an inherited muscle disease called oculopharyngeal muscular dystrophy that affects eye motion and can cause difficulty swallowing. In younger adults, ptosis can be caused by a group of muscle illnesses called progressive external ophthalmoplegia, which cause ptosis in both eyes, problems with eye movement, and sometimes other muscle symptoms that involve the throat or heart muscle.

Nerve problems — Because the eye muscles are controlled by nerves that come from the brain, conditions that injure the brain or its cranial nerves sometimes can cause ptosis. These conditions include stroke, brain tumor, a brain aneurysm (a grapelike swelling on a blood vessel inside the brain), and nerve damage related to long-term diabetes. Another cause of ptosis is Horner’s syndrome, which also can cause an abnormally small pupil and loss of the ability to sweat on half the face. One particularly dangerous cause of Horner’s syndrome is a cancerous tumor located at the top portion of the lungs.

Local eye problems — In some cases, an eyelid droops because of an infection or tumor of the eyelid, a tumor inside the eye socket, or a blow to the eye. 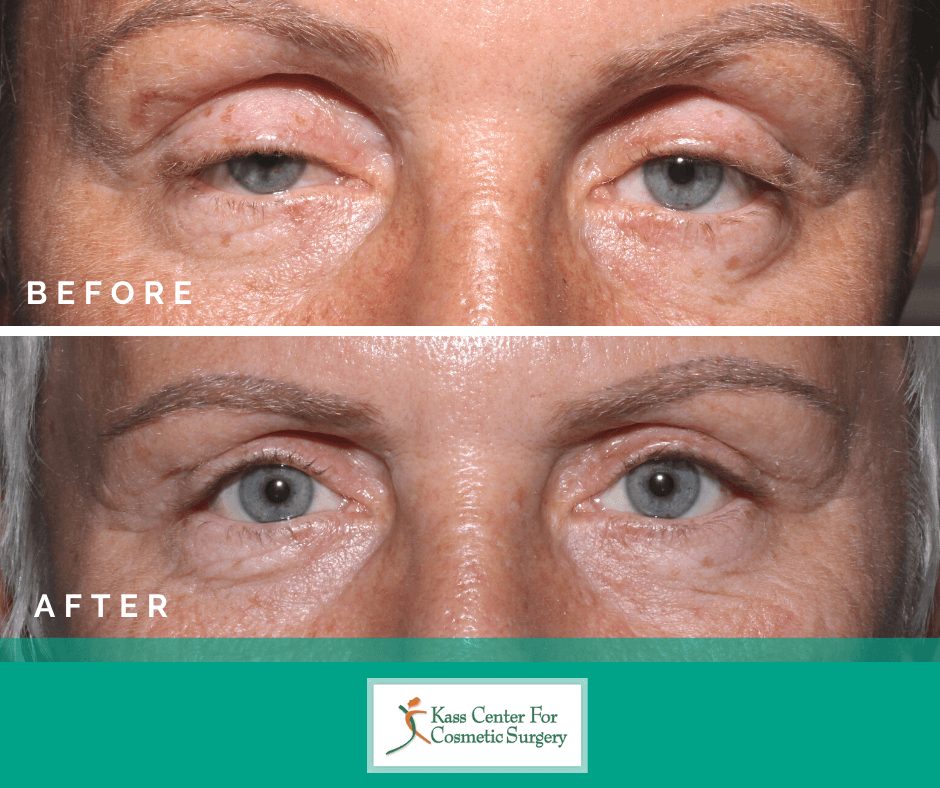 Doctors assess the severity of eyelid droop by taking precise measurements of the eyelid and eye opening. You can screen for the problem yourself by looking straight ahead in a mirror. As you look at your eye, a sizable part of your iris (the eye’s colored circle) should be visible above your pupil, and no part of the pupil itself should ever be covered by the eyelid.

If you have ptosis, the drooping eyelid narrows your eye’s opening, which makes your affected eye appear smaller than normal. You also may lose the crease (fold of skin) that normally lies between your upper eyelid and eyebrow. If ptosis covers your pupil and limits your vision, you may try to compensate unconsciously by raising your eyebrows. This can cause tension headaches and give your eyes an odd, surprised appearance. You also may tilt your chin up and look down your nose as a way of seeing out from under your eyelid`s lower margin. 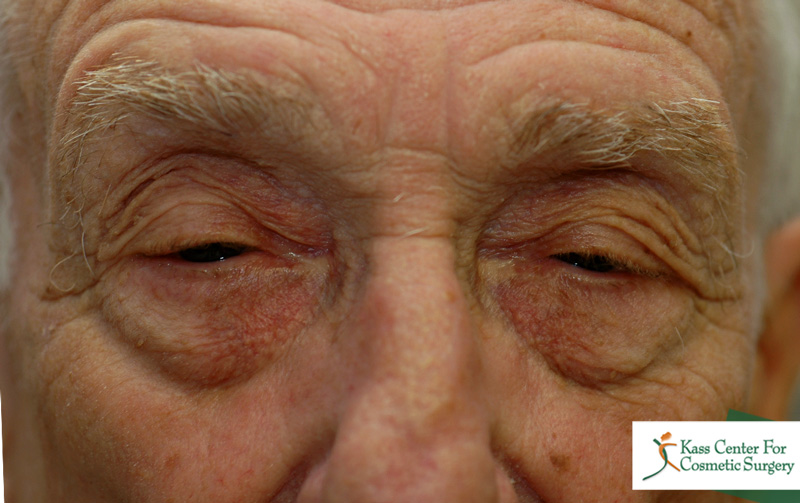 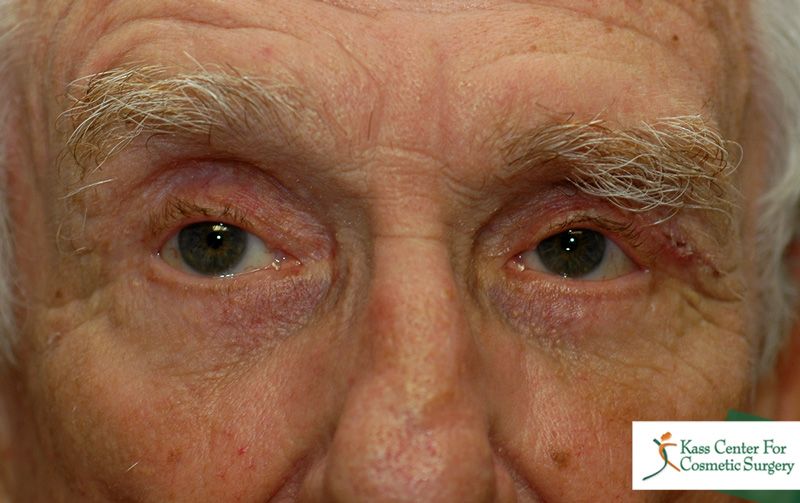 Other symptoms of ptosis include a decreased ability to keep your eyes open, eye strain from the increased effort needed to raise your eyelids, and fatigue, especially when reading. In severe cases, it may be necessary to tilt your head back or lift the eyelid with a finger in order to see out from under the droopy eyelid(s). You may also complain that your eyelids have a tired appearance from “droopy eyelids” even though you are well rested.

Acquired ptosis is usually treated by surgery. The surgery is usually performed as an outpatient (there is usually no need for hospitalization). Local anesthesia, which numbs the upper eyelid, is combined with light sedation so there is little, if any, pain during or even after the procedure. The main goals of ptosis surgery are elevation of the upper eyelid to restore normal field of vision and an attempt to achieve symmetry with the opposite upper eyelid. 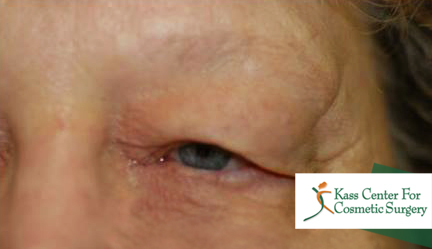 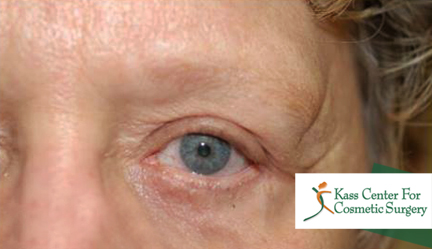 Ptsosis is usually due to weakness in the muscles or the nerves of the eyelid. To effectively treat ptosis requires a special understanding of the anatomy and pathophysiology of the eyelid. The excellent general plastic surgeons who do tummy tucks and breast augmentations almost never have been trained in eyelid anatomy or pathophysiology, and should NOT be the one you choose to treat your ptosis, which should be treated only by a fully fellowship trained oculo-facial surgeon. Fellowship in the American Society of Oculofacial Plastic and Reconstructive Surgery (ASOPRS) indicates that the surgeon has greatest specialized training and expertise in this subspecialty.

If you have ptosis, please contact Dr. Kass who is fully trained to treat this problem and has been in practice in Tampa Bay for over 30 years.